A Yukata Stroll around Kawagoe

Kawagoe City in Saitama Prefecture is also called “Koedo” or “little Edo” from its resemblance to Edo as Tokyo was known as before the Meiji period. The streets are lined with ancient merchant warehouses giving the city the atmosphere of Tokugawa period Japan. Even so the warehouses are interspersed with smart cafés and chic boutiques to make your walk even more interesting.

In Kawagoe, you can rent a yukata, footwear and other gear and there is even a service that will help you to put them on. Thus even if you come unprepared, you can easily and quickly slip into more time-appropriate wear to enjoy the sites. 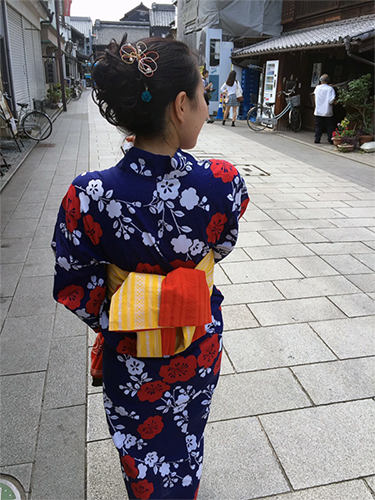 A short walk brought me to Hikawa Shrine, where you can pray to the god of marriage for luck in love. Walking through the Torii or gate I was greeted by the tinkling sound of Edo wind chimes. The colorful glass wind chimes are a feast for both the eyes and ears. I write a wish on a strip of paper and attach it to a wind chime. If you visit the shrine in the evening, I am told you will be able to see the light-up of myriads of bamboo ball wind chimes and their reflections in the river, which I imagine would be a truly visionary experience. (This can be seen during the summer match making wind chime festival held until August 31.)

I decided to try an unusual type of fortune slip. The shrine also offers fortune slips written in English. I aim for one red “fish” among many others and as I catch it I find a fortune slip inside. The fortune slip from the god of match making says 大吉, or great blessing! So this year may become my lucky year ♡ (the label on the fish says “peace throughout the year” so I suppose it must be a sea bream) (Explanation: The fish that visitors can angle for after a small offering is a sea bream (The label on the fish says “Peace throughout the year” – except it does not. The last character for “peace” has been replaced with a character with the same pronunciation but meaning “sea bream,” the fish that the label is on.)